Various planning anomalies in our round-the-world itinerary forced a slight detour from Quito to Miami upon us, prior to the start of the next major leg through Central America.
We'll return to Florida in a later entry, noting here only that the USA immigration process was a pain, and that airport taxis are phenomenally expensive after South America. Thus Monday night was spent in an airport hotel, before a return to the airport and a short flight to one of our most beloved destinations...

We're cheating a bit here - we've often visited Barbados before, but being so close to the USA, we just couldn't resist snatching a week's R & R on this tiny Caribbean jewel. 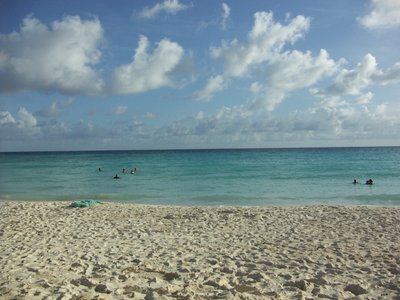 Okay, so we´re biased, but what's not to like about near constant sunshine, flawless white sandy beaches, warm sea, welcoming inhabitants, great food etc.? Oh, and Barbados also produces the world's oldest and (in our humble opinion) best rum.

Landing on Tuesday afternoon at the newly modernised Grantley Adams Airport, we painlessly cleared Customs and Immigration and took a leisurely taxi ride to our hotel, the Croton Inn.

By the time we'd settled, unpacked and showered it was evening so we deferred further exploration and enjoyed a meal and a couple of Banks' ("the Beer of Barbados") at the Croton´s restaurant.

With posting and shopping to do today, we headed to Barbados' capital city - Bridgetown. The island is tiny; 14 miles wide and 21 miles long, so getting about is easy. Two types of bus exist - the respectable blue Government-run type, and the privately-run yellow or white-with-maroon-stripe taxi-buses. For an unforgettable ride, go for the taxi-buses. You can usually hear them long before they arrive as they blast out music and blare their horns, and they generally travel at around Mach 3.

Bridgetown is always bustling and largely friendly, but unlike a lot of capital cities it´s also well laid out and attractively landscaped. 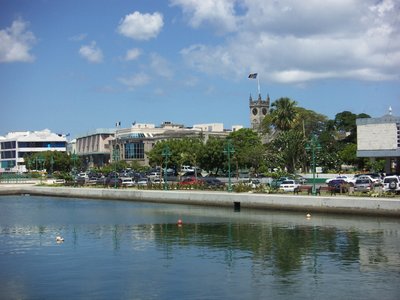 Broad Street is lined with every kind of shop the average tourist needs, so dodging through the crowds of browsing ´cruise-shippers´ we headed up to the Post Office to offload some weight from our backpacks by sending stuff home.
Posting taken care of, we returned to Bridgetown´s beautiful harbour and to perhaps our favourite watering-hole in the entire world (excuse the shameless plug), the Waterfront Cafe. There really is no better place to relax with a beer over lunch, looking at expensive yachts bobbing on the sun-dappled water and to watch the Bajan world go by. Aaaaahhh. 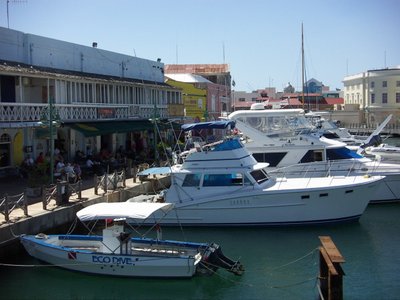 Customer parking outside the Waterfront Cafe...

Did we mention the rum? Mount Gay Rum, founded in 1703, is the oldest rum in the world and a visit to the distillery for a tour is a must. 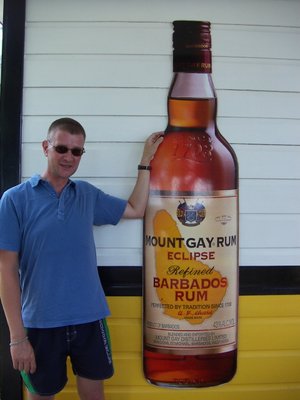 The trip through Mount Gay's modern Visitor Centre takes in an educational film charting the history and process of rum manufacture in Barbados, a close-up look at some of the stills and other vessels historically used by the distillery and a visit to the bottling plant. Finally, (and best of all) a visit to the bar provides the opportunity to sample the product -in various guises- at first hand. Having opted for a lunch-inclusive tour, by 2:00pm we found ourselves awash with rum and stuffed with flying-fish (a Bajan delicacy, also unmissable) and therefore needing to get back to basics, i.e. lying on a beach.

The bus back from Mount Gay dropped us at the holiday-resort rich area of St. Lawrence Gap wherein lies the busy-but-wonderful Dover Beach. A couple of sun loungers and a beach umbrella easily arranged, the world just slowed down and drifted with the tide for a couple of hours...

We wouldn't normally advocate fast food as a good evening meal, but Chefette - a Barbados chain - is a bit different. Somehow, the delicious rotis (beef or chicken curry parcelled in a thin tortilla wrap) and broasted chicken they serve up definitely defy the term 'junk food'.

Let's face it; the theme of this week is relaxation - no more overnight buses, no exhausting treks, no cold showers; the coldest thing here is the beer. Barbados beach life is addictive, and with Dover Beach no more than twenty minutes' walk away nothing could be better than a lazy day tanning in the sun punctuated by the occasional thirty-second dash into a blood-warm sea.

One event dominates Friday nights on the south coast of Barbados - the fish fry at the fishing village of Oistins. Here, locals and tourists alike can party the night away in a lively atmosphere, taking their pick from the many stalls selling grilled and seasoned fresh fish, and numerous other caribbean delicacies such as macaroni pie, rice and peas, fried chicken and more all washed down with plenty of Banks' beer and/or rum.

For us, it's the perfect introduction to a Barbados weekend.

Previous Next Table of contents

Now when you head to Nicaragua, you should try another excellent rum, Flor de Cana. This will have staying in your room enjoying it with a liter of Coke. Enjoy your travels.
JW
http://tulsatrot.travellerspoint.com

This blog requires you to be a logged in member of Travellerspoint to place comments.

If you aren't a member of Travellerspoint yet, you can join for free.